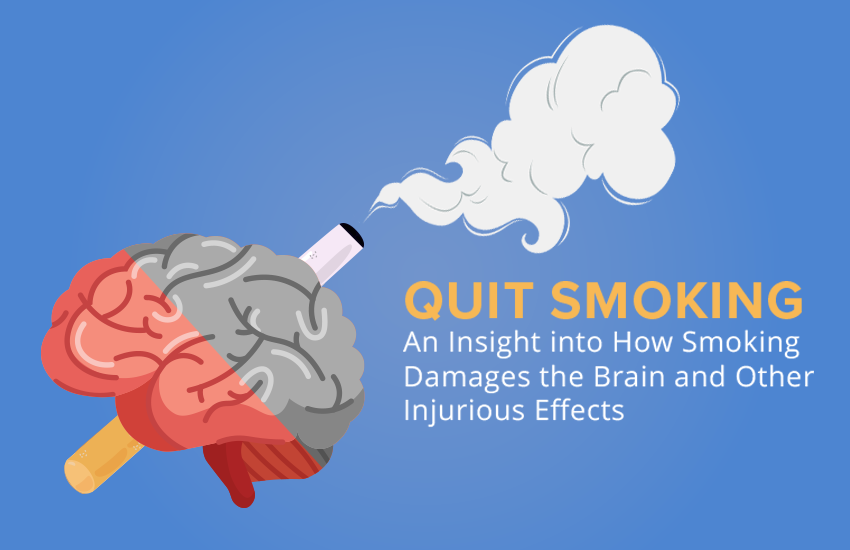 Every year, the second Wednesday in March is celebrated as No Smoking Day to encourage people to quit smoking. The main purpose of this day is to spread awareness about the harmful health effects of tobacco consumption through cigarettes and other modes.

Smoking is one of the worst habits that one can adopt. This is because smoking damages the brain. That’s why, in this post, we will quickly discuss the effects of smoking on the body, but first, let us see the numbers.

More than 267 Million Smokers in India

According to a World Health Organization (WHO) report, nearly 267 million adults aged 15 years or above are users of tobacco in India. (Tobacco in India (who.int)) This not only includes those who use cigarettes, but also those who consume smokeless tobacco products such as khaini, gutkha, betel quid with tobacco, and zarda.

Not only does smoking damage the brain, but it also leads to huge economic losses. The total economic loss from smoking and tobacco usage amounted to INR 177 341 crores (USD 27.5 billion) in the year 2017-18 for persons aged 35 years and above.

All tobacco products including cigarettes contain a compound known as Nicotine that activates dopamine signals that create pleasurable sensations. This results in the brain associating the use of nicotine with feeling good. Over time, nicotine tolerance is created in the brain. (How Smoking Affects The Brain? – PharmEasy)

What this means is that the brain gradually requires more nicotine. When someone tries to quit, she/he suffers from withdrawal symptoms. Some of the withdrawal symptoms include: (Nicotine | Brain and Body Effects, Addiction, How It Affects Health (drugwatch.com))

When the symptoms of withdrawal begin to surface, people reach out for another cigarette and the whole cycle repeats again. This is why it gets very difficult for people to quit smoking.

Yes, smoking damages the brain but in more ways than one. (Smoking Effects on the Brain: What You Need to Know (healthline.com)) Some of the other ways in which the brain is damaged include –

Quitting smoking is difficult, but not impossible. A willy-nilly mindset is not going to be of any use. It will not get over in a day, but with the right determination, it will gradually get better.

The Ministry of Health and Family Welfare (MoHFW) runs an m-cessation program just for this purpose. You can either visit their website at www.nhp.gov.in/quit-tobacco and fill up the required details or you can also give a missed call on 011-22901701 for registration.

Some of the other ways of quitting include –

To sum up, smoking damages the brain but with the right mindset, you can quit it too. However, smoking for a prolonged period can come with its own set of complications that cannot be cured simply by quitting.

Should you require hospitalization, then you must have a health cover. If you do not have one, then check out Vital whose subscription starts from just Rs. 299 per month.