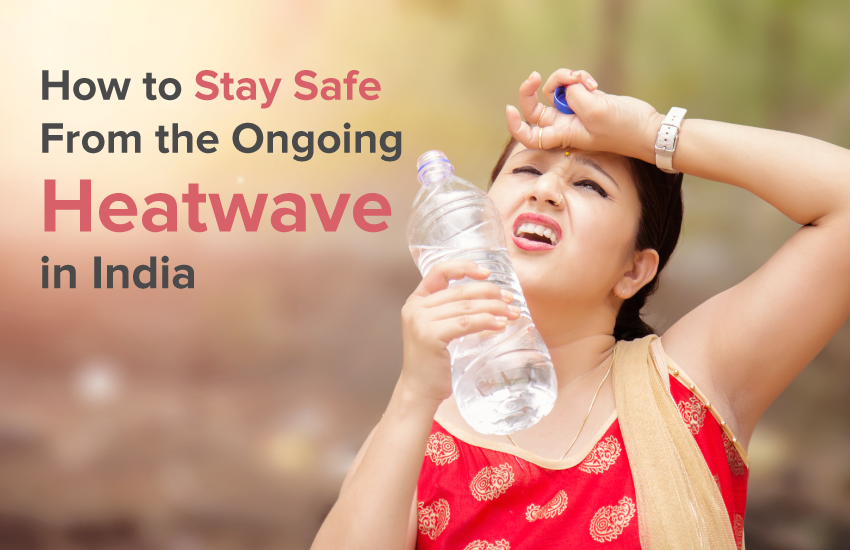 The heatwave has several negative effects on your health. Heatwaves can even result in death apart from causing serious illnesses. Heatwaves can also worsen chronic conditions such as cardiovascular diseases, respiratory problems, nervous system disorders, etc.

With the ongoing heatwave in India sending the mercury on overdrive, it is necessary to know about the health hazards of a heatwave and the ways to stay safe and healthy despite the heatwave.

Let’s have a look at the health hazards of the heatwave in India.

Dehydration is a common health hazard associated with the heatwave in India. Due to the extreme heat, the body tries to cool down by perspiration to maintain the optimum body temperature. As a result, the body loses fluids and salts quickly. During a heatwave, your body can lose 1.4 L of liquid every hour.

Excessive loss of fluids due to sweating results in dehydration. Since the body does not have enough liquid to sweat and cool down, it reaches a high temperature which causes the blood flow to the vital organs to slow down drastically, thereby adversely affecting their functions.

A heatwave can worsen chronic respiratory diseases such as chronic obstructive pulmonary disease (COPD), asthma, and other long-term lung disorders. A pre-existing respiratory disease symptom can flare up due to a heatwave, especially if you are dehydrated. The high ozone level and pollutants in the air during a heatwave worsen your breathing problems.

Heat rash or prickly heat is a common result of the heatwave. Inflammation of the ducts of the sweat glands causes heat rash. The opening of the inflamed sweat gland duct is blocked, resulting in the sweat being trapped underneath the skin instead of coming to the surface of the skin and evaporating. The trapped sweat results in inflamed lumps on the skin, which are itchy and painful.

Heatstroke is a very serious condition caused by the heatwave. It is characterized by a very high body temperature exceeding 40 degrees Celsius or 104 degrees Fahrenheit. This is because the body is unable to cool down. Symptoms of heat stroke include nausea, vomiting, flushed skin, rapid breathing, confusion, agitation, slurred speech, delirium, and seizures.

Heatstroke can even result in a coma. Left untreated, heatstroke can damage the brain, kidneys, and heart and even cause death.

Heat exhaustion is another heatwave-induced condition characterized by heavy sweating and high pulse, rare due to overheating the body. It progresses to heat stroke if left untreated. Other symptoms include muscle cramps, nausea, fatigue, headache, and dizziness.

The negative impact of heat illness on the body’s metabolic system involves the kidneys. Heat illness such as heat exhaustion or heat stroke due to the body reaching a temperature of 104 degrees Fahrenheit due to heatwave damage to the kidneys. Dehydration results in low blood pressure, leading to impairment in kidney functions.

Studies have found that extreme heat generated by heatwave hurts mental health. Physical exhaustion and restlessness caused by heatwave can lead to anxiety and depression. Children, adolescents, and older adults suffering from pre-existing mental issues are more at risk.

There are multiple ways to beat the heatwave in India and escape its negative impacts. Some of them have been discussed here.

High protein food products such as meat should not be consumed during a heatwave. This is because a lot of digestive power is required to digest proteins which generates a lot of heat. This process is called thermogenesis. During a heatwave, the efforts should be directed towards keeping the body cool, and consuming high protein food impedes this purpose.

Alcohol and caffeinated beverages like tea and coffee are diuretics. This means such drinks spur the body to lose fluids, leading to dehydration. Such drinks do not compensate for the loss of fluids due to sweating and instead cause loss of the existing fluid content of the body. Thus, it is best to avoid drinking alcohol, tea, and coffee during a heatwave in India.

Applying sunscreen on your face and other exposed parts of your body before stepping out of your house during the heatwave in India is recommended to avoid heat rashes and sunburns caused by the sun’s scorching rays.

Avoiding outdoor activities, especially between 12 pm and 3 pm, is recommended to escape the sun.

Heatwave in India is an annual affair. Thus, it is better to acclimatize your body to the high temperatures by adopting preventive measures against the adverse effects of a heatwave.