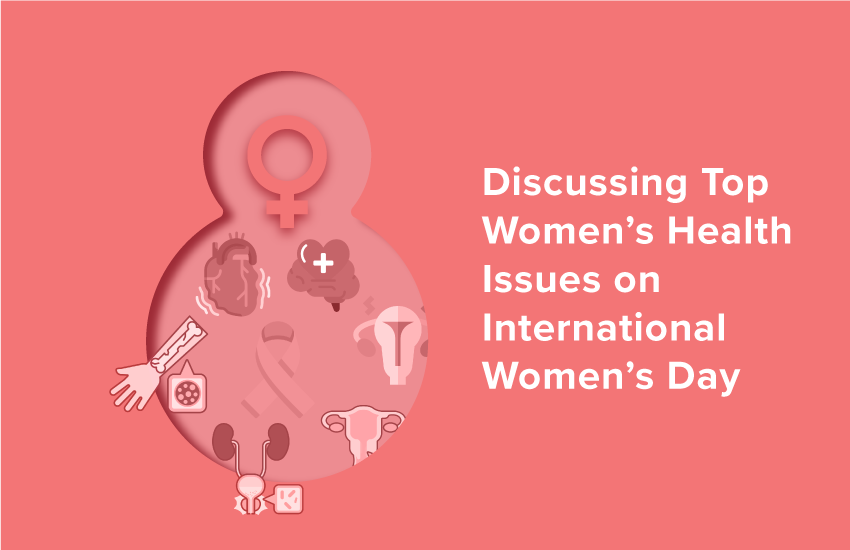 While many health issues affect both men and women, the way they impact the two sexes is different. Furthermore, many health issues exclusively affect women because of their association with the female organs. Also, several pathological conditions pose a greater health risk to women than men.

Some of the most serious women’s health issues and the ways to manage or avoid such issues have been discussed here.

Unlike men, the symptoms of a heart attack in women are more often not related to the chest. Chest pain is the most common symptom of a heart attack, but it is not the case with women. Common heart attack symptoms in women include discomfort in the neck, shoulder, jaws, upper back or abdomen, pain in one or both the arms, shortness of breath, heartburn, dizziness, fatigue, nausea, and sweating.

Women are more likely to suffer heart attacks due to blockage in both the main artery and the smaller vessels supplying blood to the heart. Heart attacks without any major blockage are also prevalent among women.

Smoking should be avoided because women are more susceptible to heart disease caused by smoking than men. Taking a regular diet of fruits, vegetables, and whole grains reduces heart disease risk. A healthy weight should be maintained with exercise and diet. Women suffering from high blood pressure or diabetes should take regular medication.

The signs of breast cancer are a thick and hard lump on the breast, redness of the skin over the breast, dimpled or scaly or flaky skin over the nipple, clear fluid or blood discharge from the nipple, or overall change in the size and shape of the breast. The appearance of any such sign necessitates immediate medical consultation.

Women should examine their breasts each month to look for changes. Getting your breasts examined by a doctor every 3 years after the age of 20 and every year after 40 is recommended.

Diseases of the ovary are also a constituent of women’s health issues because they adversely affect both the general and reproductive health of women. Main ovarian diseases include ovarian cancer, ovarian cysts, and primary ovarian insufficiency. Ovaries store eggs and are two in number present on either side of the uterus.

Fluid-filled sacs which develop in or around ovaries are called ovarian cysts. Ovarian cysts may or may not cause symptoms. Symptoms include pain in the lower abdomen, bloating, and swelling. Surgery is required if the cysts persist for long or cause pain. Ovarian cysts in postmenopausal women require surgery.

Surgery and chemotherapy are the common treatment methods for ovarian cancer.

Primary Ovarian Insufficiency is a condition in which the ovaries become inactive before 40. POI causes irregular or missed periods and reduces fertility. Symptoms include:

Cervical cancer is also ranked among major women’s health issues. The cervix is the lower part of the uterus connecting to the vagina. Exposure to Human Papilloma Virus is believed to play a major role in causing cervical cancer.

Symptoms of cervical cancer are pain during sex, pelvic pain, vaginal bleeding post intercourse or between periods, and vaginal discharge, which is watery and has blood in it.

Risk factors for cervical cancer include:

Among many women’s health issues, UTI is very common. 1 out of every 5 women contract Urinary Tract Infection at one point in their lives. UTI is caused by bacteria inside the urinary system and causes infection in the kidneys, ureters, urinary bladder, or urethra.

Symptoms include painful urination, blood in urine, pain in the abdomen, pelvis, or sides, frequent urge to urinate, fatigue, pain during sex, fever, and vomiting.

Antibiotics such as sulfonamides, doxycycline, cephalosporins, and more are used to treat UTIs.

Osteoporosis is a disease of the bones in which the bones become brittle and weak and are susceptible to fractures. This disease affects women more than men. This is because women’s bone density is lesser than men and bones are smaller as well. Loss of bone mass after menopause also increases the prevalence of osteoporosis among women.

Selective Estrogen Receptor Modulators help in slowing the rate of bone loss. Bisphosphonates are given to treat bone loss. Calcitonin hormone can also be given to building bone mass.

Mental health cannot be discounted when it comes to women’s health issues. Among various mental disorders, depression is very common among women. Women are twice at risk of suffering from depression as compared to men.

Symptoms of Depression include anxiety, sadness, hopelessness, low self-esteem, suicidal thoughts, fatigue, loss of interest in activities, lack of concentration, and either lack of appetite or overeating.

Getting access to modern healthcare is an essential part of women’s empowerment. The thrust of governments and international bodies such as WHO should be to provide the best quality healthcare services, especially to women belonging to the less privileged sections of society.

If you are concerned about women’s health issues and want the best in healthcare, then do check out the better health cover at Vital.